In the middle of the sultry day, at the seemingly dullest of noontide moments, when time follows its usual course as if nothing could ever break it, when danger is out of mind, then all of a sudden its course somehow comes to a standstill: time stops running. The moment freezes: as if the wings of butterflies freeze fluttering around the blooming spring flowers, as if the buzzing of bees stills to a freeze, the air stops quivering, everything is at once in motion and in calm. Time has stopped.

What is this? What is this paralysis of the commonplace? What is this extraordinary force, which petrifies time so that it comes out of its joints and remains paralyzed? What is it that breaks the course of springtime? The Greeks invented a name for this freezing moment followed by a sensation of an impending danger and paralyzing horror. It is called panic, from Πανικός, ‘of Pan’. The word ‘panic’ designates the approaching of the god Pan.

There is a capitalist panic, there is also a philosophical panic.

There is the apocalyptic spectacle of the “Event”; there is also its critical or philosophical use value. I will designate it as philosophical panic. The worse the diagnosis, the more actual it is. The catastrophic diagnosis is necessary for the performative value of critical discourse: the catastrophe must last in order critical discourse to last itself. This performative use of critical thinking requires it being installed in the position of self-exegetical agent of the present – literally in an apocalyptic position (from the Greek ἀπό-καλύπτω, ‘to reveal’); but what it reveals is only its own instance. Phenomenology of panic disorder: panic establishes a continuous order, where the difference between inside and outside is erased. The interruption of time becomes a paralysis of the reflexive capacity, that is to say of the capacity to produce distance, difference, the capacity of flexion of a self; it installs the sensation of a pan–objectivity, a pan–actuality; of an actually infinite, unsurpassable limit. Panic diagnosis erases the differences, the complex singularities of the situation as well as of its complex temporality, its heterochrony. Panic disorder has its origin in a pathology of time, in a time path-ontology; in particular, in the suspension of the power of the temporal vector in the vertical axis of the Actual, extrapolated as an unsurpassable horizon. Thus the discursive Apocalypse offers itself as an unsurpassable horizon of the Real. At the same time, the hypertrophy of the actual reveals its abyss as an unsurpassable, therefore ontological condition. Pandemic quarantine appears today – or yesterday, already – as a symptom of the quarantine of existence in the present. An ontological confinement.

It is in this horizon, the horizon of ontological confinement, where philosophical panic and capitalist panic become structurally indistinguishable. Panic diagnosis is isomorphic to what it denounces: it performs massive homogenization and simplification, always tending towards an apocalyptic horizon, the unsurpassable horizon of the present. Thus, we have heard recently fellow philosophers speaking of an invention of panic, that is of the invention of a panic moment aimed at a biopolitical mass control through state of exception, the paradigm of the modern state. There is no doubt, we have witnessed the enactment of technologies of collective psychological control, the experiments with a collective inhibition. However, to generalise this diagnostic, homogenising it with all forms of exclusion, exception  or biopolitical control, not to mention the complex history and structure of these forms, ultimately results in the paralysis of any possibility of counter-action; in two words, in a state of panic.

What is indisputable is that the “lightning of the event” triggers a collective effervescence, an excitement of thought in the face of the unexpected, even if it would be the worst. It’s the inflammatory power of the event. Panic is almost magically transformed into its opposite, into viral social production. Indeed, the networks were in flames! If the media jargon – and especially that of social networks – has long been extolling the viral metaphor, we must not fail to recognize the emergence of the pandemic symptom. The truth of networks is the viral spread.

A leftist thinker recently wrote, and rightly so, that the time of the virus goes against the time of capitalism. We can add to this diagnosis that the time of pandemic suspension itself endangers capitalist time, threatening to hamper or even halt the frantic acceleration of capital. However, we can further identify an isomorphism, which draws the tension between these two temporal orders, in particular: the isomorphism between the structure of viral spread stricto sensu – the spread of COVID-19 and the viral spread of capital flows, of material and immaterial goods, exercised by the capitalism vaguely called neoliberal, and which I tend to call speculative or performance capitalism. It is this acceleration that is, so to speak, the regulatory horizon of capitalism today. The fantasy of an immediate effect, of an immediate production of value, is the telos.

In short, the obscure object of desire of actual capitalism is to be a virus.

Yet, a virus of lethal power and exponential speed has arrived. A virus: a form of life that is both “primitive” and uncannily “hypermodern”, that reflects the capitalist structures of expansion, using them as its vehicle. COVID-19 would never have been so “efficient” without its capacity of hacking the global techno-economic networks: its microscopic intelligence has enabled it to act on a marcotechnological scale, a planetary scale. This is why the first effect of the virus was so spectacular, and so catastrophic too: the fluid Leviathan of today has been petrified before the image of its Double; his outburst of panic is caused by terror before his own abyss. His panic attack is the panic attack in front of himself. 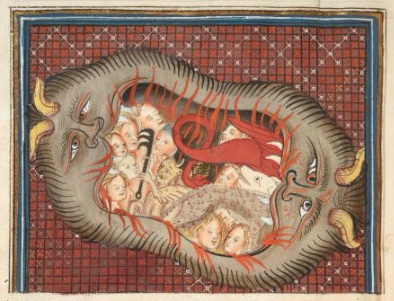 ‘Picture-Book’ of the life of St John and Apocalypse, Origin: Netherlands, S. or Germany, circa 1400, British Library

The virus has chased ghosts from its crypt, and now they wander unbridled in the dumbfounded space of the globe, they invest what would no longer bring them any profit. Thus, at midday, at the most banal moment of the day, the undead Leviathan found itself surrounded by its own lethal power, for which its circle of synthetic salt – the witchcraft of its speculative economy – no longer has any sense. The financial Leviathan fell in his own trap in Pan’s forest: he got entangled in the jungle to which he himself has tried to reduce the world. Having saturated all vacant space, having blocked all the exits, he fell into his own trap: the false substance trying to seize the whole world – forms of existence in their totality, the totality of “nature” – to consume it. This lethal, irrational desire had to face its own limit, in the image of its Other.

The suspension symptomatically revealed the irrational, if not counter-rational, principle of the hegemonic political and economic structures – on the one hand, the rigidity of the obsolete apparatus of the “Monopolist of legitimate violence”, the State, the structural inadequacy of its immune system to the contemporary forms of biopolitical regulation (the hegemonic biocapitalism of speculative networks, having commodified the forms of life formerly governed by the State) and respectively, the progressive but total submission of old governmental principle to the new “fluid” hegemony, made possible by the deliberate acts of the new type of political “elites”, the neoliberal populists; and on the other hand – the need for unlimited, continuous and all-encompassing expansion as a necessary condition for the survival of the perverse, viral capitalism. Thus, the inability to cope with the new form of viral spread stricto sensu ended up mining the fundamental principle of performative circulation: the principle of permanence, the requirement not to stop under any condition. Even if it was only a few moments – one or two months at most so far – they will nevertheless mark a historic break, a caesura, by demonstrating not only the possibility of an interruption, of a suspension of the “normal course of affairs”, but also the deep pathology of the said normality. After this interruption, whose uncanny exponential speed and “microscopic” origin were unimaginable before, only exalted adicts would remain in state of terror and awe in front of the Capital Leviathan.

Under the vertical light penetrating the abyss of this caesura, in the thunderbolt of the event, the shadows of the crypt dissipate: the false stability of the financial system, of the circulation of credits depending on the viral madness of consumption, also becomes sharper than ever before; the new poverty of the public structures of the so-called “developed states” is also becoming dramatically visible – not only the reduction of funds, the dismantling of sectors that are no longer deemed profitable, such as public health, resulting in savage privatization, but also the ineffectiveness and inadequacy of its structures, and the structural pathology of the distribution of goods in general. What we live today is a crash test on a planetary scale (I evoke Frédéric Neyrat’s strong image), by which the hegemonic technoeconomic powers experiment with disaster management, with massive restriction procedures, by examining the thresholds of tolerance and resistance of the “population”, thus revealing the deep structures of power which would not hesitate to seize the direct governance of the lives of “its subjects”, which are preparing this seizure for a long time indeed.

The COVID-19 pandemic thus reveals as clearly as possible the pandemic of today’s capitalism, of its structural pathology. And the process of “normalization” cannot but confirm the diagnosis. The viral exception is over, long live ordinary pathology!

A lethal power has tried to saturate the world, to absorb all forms of existence, the whole potentiality of life, to consume it, to seize the all: it has tried to take the place of Pan.

The false Pan has now got in trouble. He is in suspension.

The Great Pan is back: Pan mortuus non est.