The Burning of God Pan

On this day, May ***, 1945, at the very end of World War II, a few days after the fall of Berlin and on the eve of Nazi Germany’s surrender, during an unexplained fire in Flakturm Friedrichshain, a concrete air-defense tower built in 1941 by the national-socialists in the Berlin park Friedrichshain, part of the Berlin Art Gallery collection (then the Kaiser Friedrich Museum) was destroyed. In order to be safeguarded by hostilities, a big number of works of art were hidden inside the allegedly indestructible tower. Amongst them, alongside Donatello’s, Michelangelo’s, Tintoretto’s, Caravaggio’s, Van Dyck’s, and Rubens’ works, was to be found one of the most enigmatic artworks of modern times – the painting that was provisionally described as ‘The School of Pan’ by Luca Signorelli.

Signorelli’s lost painting was a vast canvas sized 194 / 257 cm., an exceptionally impressive format for the end of the Quattrocento. This painting was one of the largest ones of the age. It was produced in the end of the 15th century, around 1490, by order of none other than Lorenzo the Magnificent himself, and was probably one of his most esteemed works in his collection. 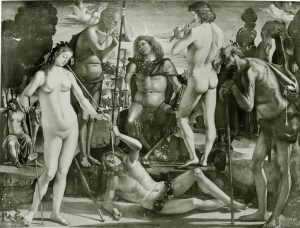 Signorelli’s ‘Pan’ includes six central figures divided into two compositional groupings. At the center of the painting is the young god Pan: a handsome, long-haired and beardless youngster, his head tilted in reflection, who seemingly has nothing to do with the archaic zoomorphic Arcadian deity, except for his goat’s legs. The god is nude, covered with a mantle embroidered with stars; he is sitting on a rocky throne, his legs frontally spread, surrounded by his suite. He is hornless, yet crowned with a two-horn crescent moon. Pan is in the company of two personages – an elderly man speaking to him with his head tilted in his direction, and a young man playing the flute, while the foreground is occupied by three strange figures: a standing nude woman, a lying young man and another elderly man leaning on a staff with his eyes forward. The god is listening to the elderly man who is leaning in his direction. Pan is also holding a staff or a scepter, his other hand resting on his thigh. What is the theme of the painting? Is it an allegory? An allegory of what? We cannot know for sure. The later descriptive titles of the painting were obviously founded upon different hypotheses. Neither of them, however, is verifiable, even less so are the allegorical interpretations to be discussed later on. The prevailing descriptions that follow up the painting’s titles include: The Education of Pan or The School of Pan, and The Court of Pan.

After the era of the Medici, there was no evidence of the painting for nearly two centuries until it reappeared in the Palazzo Pitti in the end of the 17th century. In 1869, the painting was discovered in the attic of the Palazzo Corsi by the artist and restorer Angelo Tricca; meanwhile, the nude bodies were found to be covered with ‘flabs’. Tricca restored them to their original appearance, thus scandalising the painting’s owner, Cardinal Corsi, whence ensued its sale. After numerous mishaps, including the Victorian censorship in the London National Gallery, the painting became possession of Wilhelm von Bode in the Kaiser Friedrich Museum in 1873. Thus the painting reached to Berlin.

The information on the painting and its disappearance available today is unclear, complicated and fragmentary. Surprisingly, the legal successors of the Berlin Kaiser Friedrich Museum (the Bode Museum) do not provide detailed information on the lost works of art. The most comprehensive and systematic information so far is provided by the Magdeburg-based German Center for the Search for Lost Works of Art (Deutschen Zentrum Kulturgutverluste), which also maintains the Lost Art Database. On the basis of the data collected by the organisation and the partial evidence of that period published in the press (for example, a review by Christopher Norris), I will here lay out all known details around the destruction of Signorelli’s ‘Pan’.

The Allied bombings on the night of December 20, 1940 struck the neighborhood around Museuminsel, the Museum Island situated in the heart of Berlin. Due to the concerns of the museum staff, an unprecedented decision was made to transfer the works of art to two of the three so-called Flaktürme (air-defense towers) in Berlin. They were believed at the time to be indestructible under any circumstances. Most of the Flaktürmе built in Berlin, Vienna and Hamburg still exist to this day: they can be seen in the Humboltdhain Park in Berlin, in the central areas of Vienna and Hamburg. The relocation of the artworks to Friedrichshain began in September 1941. For this purpose, along with other collections of the State Museums, the entire first floor of the building, and later the premises on the second and third floors, were used. The relocation was essentially completed by September 1942, and some large-format paintings from the museum dungeons were transferred a while later. Amongst them was probably Signorelli’s ‘Pan’, although accurate data cannot be found. On account of the advancement of the Soviet troops on the Eastern Front, after consulting the responsible ministries the museum administration decided to relocate the artworks outside Berlin and to the ‘Kaiseroda’ salt mine in Thuringia, but only a month later the decision was overturned due to security reasons. According to ‘Lost Artworks’, there were 434 paintings left in the Friedrichshain tower, mostly large-format ones, as their size did not allow their transportation in mine carts. After the fall of Berlin on May 2, 1945, the bunker was handed over to the Red Army. On May 4 and 5, the security guard of the museum was again allowed access to the air-defense tower. Regardless of the measures taken to protect it, on May 6 a fire burst out in the storage room, engulfing the entire first floor, most likely along with a large number of paintings. After the fire, the control over the the tower was seemingly terminated. Free-roaming civilians were observed. A week later, between May 14 and 18, 1945, again under unclear circumstances, a second fire burst out, which completely destroyed the interior of the tower. Both towers were detonated in 1946 by the Red Army, but were not completely destroyed; they were later covered with soil and transformed into grassed and wooded hills in the Friedrichsain Park. It was not certain which of the two fires destroyed Signorelli’s ‘Pan’, as the causes of both remained unclear. This is how the most unusual and astounding representation of the god who personifies nature disappeared amidst the flames inside a monstrous concrete structure at the end of the most monstrous war on earth ever inhabited by god Pan.

Today, the painting has been made known only by the few preserved black and white photographs (the most important of which is the professional black and white reproduction in the Kaiser Friedrich Museum album), as well as by one of the few color photographs of the collection, yet in a smaller format and far lesser quality.

The unexplained circumstances around the disaster could undoubtedly nourish any sort of fantastic assumptions and inspire the imagination of a new Dan Brown. This trite conspiratorial fantasy, however, can hardly be compared to the fantastic fate of one of the most astonishing and enigmatic artworks of modern times.

This autonomous thread of the blog is dedicated to Signorelli’s enigmatic painting and its mysterious fate, as well as to its enigmatic disappearance.  The texts that follow deal neither with art criticism, nor with history research – they comprise a laboratory of the philosophical fantastic. Its specific purpose is the new volume of the series ‘Philosophical Fantastic’, which is to be entitled ‘The Return of Pan’.

To commemorate the anniversary of the burning of Signorelli’s Pan, we shall here devote ourselves to the return of the Great God Pan.